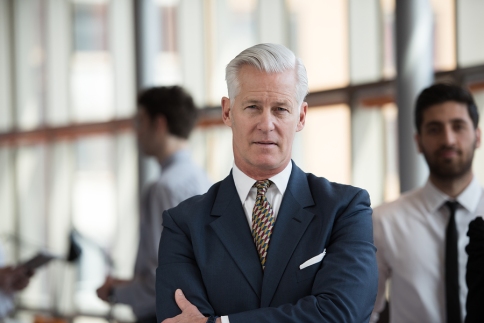 Clarification:  This post was written after several discussions on the topic with prominent people in the TOC field.  The main discussion was led by Ray Immelman.

Given the wide spread of the size of organizations, and spectrum of personalities who are CEOs, can we have any idea of what it takes to be one?

Taking the responsibility for the future of an organization, for its shareholders and employees, fits only people who have enough self-confidence to believe they can do it. Actually every single CEO has to demonstrate self-confidence at all times, which requires a lot of self-control.

I believe many CEOs have doubts and fears they hide well behind the façade of someone who clearly knows what needs to be done.

The challenge of every CEO is to get hold of the basic complexity of the organization, its stakeholders, clients, and suppliers. On top of the complexity there is considerable uncertainty.  The combination of complexity and uncertainty impacts the efforts of the CEO to answer two critical questions: “what to change?” and “what to change to?”  On top of dealing with complexity and uncertainty every CEO also has to constantly resolve conflicts within the organization and between the CEO and the shareholders.  These conflicts produce obstacles to implement the changes proposed by the answer to the second question and by that raise the third basic question: “how to cause the change?”

The first key personal dilemma of every CEO is derived from the difficulty to answer the three key questions and, based on the actual results, how those results are judged by the board, shareholders and possibly stock market analysts.  The seemingly unavoidable outcome is that the CEO fears that taking any risk, even when the possible damage is low, might be harshly criticized.  Considering the complexity and the variability the level of the pressure is so high that it pushes the CEO not to take even limited risks required for potential growth.

This means that within the generic conflict of take-the-risk versus do-not-take-the-risk the interest of the organization might be to take-the-risk, yet the CEO decides against taking such a risk because of the potential personal damage.

When analysing the CEO conflict we have to consider also the risk of not-taking-risks. First of all the shareholders expect better results and the CEO, trying to resolve the conflict, has to promise certain improved results – and he’d be judged according to these expectations.  Actually achieving too phenomenal results might also be seen as too risky, creating too high expectations in the stock market.  On top of that there are enough other threats to the organization and failing to handle them would be detrimental to the CEO as well. Having to behave with the utmost care on almost every move adds to the potential opportunity for TOC being able of superior handling of uncertainty and risks.

The key TOC insight is that the combination of complexity and variability leads to inherent simplicity.  The essence of the simplicity is that actions that their impact is lower than the level of the noise (variability), cannot be proven that their outcomes have been positive. This leads to focus only on the more meaningful actions. The simplicity also supports judging more daring actions looking for those that their potential downsides are limited and the upsides are high. When you add other TOC insights that reduce  variability, improve operational flow, provide checking the true financial impact by the use of throughput economics and the use of powerful cause-and-effect analysis then the combination yields an overall safer environment.

Taking risks is not the only dilemma with a special impact on the personal side of the CEO. While the fear of being harshly criticized is pretty strong – the CEO wishes to get the glory of any big success.  The dilemma is raised when the success requires the active participation, also considerable inspiration, of other people.  It is even more noted when the other people are external to the organization, like consultants.  Challenging existing paradigms, which is the core of the TOC power, might put the light on the TOC consultants and rob the glory from the CEO, who has chosen to take the risk, but might not fully enjoy the successful outcomes.

How do people react to someone who suddenly changes his own previous paradigms? Isn’t it easy and even natural to blame such a manager for not being able to change much earlier or of being too easy to be influenced?

Actually this dilemma seems to be tough to resolve in order to achieve a win-win between the organization and the CEO and also with the other executives. Emphasizing how wrong the old paradigms are makes the manager’s dilemma stronger.  People have a reason to refuse to admit mistakes.  It harms the self-confidence and it radiates incompetence, which is probably a flawed impression but still pretty common.  Of course, the other side of the conflict is the potential damage of not admitting the previous mistakes.

In the old days of TOC we have used the OPT Game and the Goldratt Simulators, which I have developed, to push managers to admit they don’t know.  This was quite effective in creating the “wow impact”.  However, the humiliation the managers went through proved beneficial only to those with very strong personality.  Too many managers paid some lip-service to the proof-of-flawed-concept and continue with the old ways.

We expect from a CEO to have that strong personality that allows recognizing a mistake and taking whatever steps required to go on the right track. We expect from a CEO to act according to the full interests of the organization without considering his personal interests.  Very few truly apply to this challenge.  Many believe that the way to handle the “agent” problem is to pay high bonuses for success.  Actually it only makes the personal-organizational conflict legitimate and could easily influence CEOs to take bigger risks that increase the fragility of the organization.

It seems we need to help CEOs to resolve both dilemmas. We have to promote the contribution of the CEO to the success, and we have to reduce the fears of the potential unknown outcomes, organizational and personal, of the change we believe would bring huge value and even in the worst case will still be better than the current state.

It is my own realization to reduce the pressure on what is “wrong” and make much more of what is “better”, making it an improvement rather than a revolution by discarding everything people have learned in the past.

3 thoughts on “The personal challenge of being a CEO”