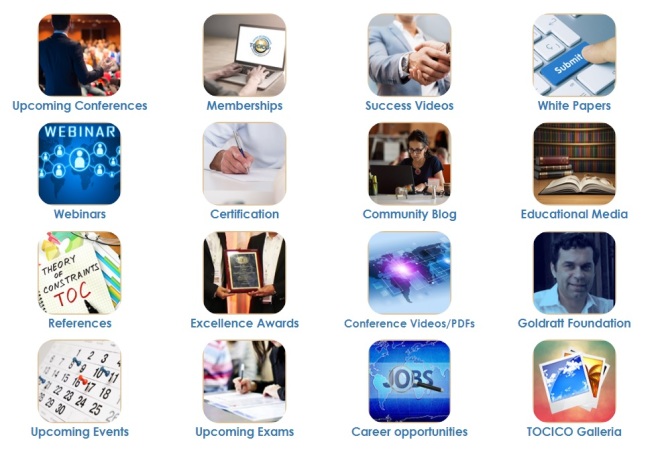 TOCICO as an independent and neutral organization of the TOC international community is at cross-road where its value to the community is, to my mind, very high, but it struggles with cash problems. For a non-profit organization the core problem is that generating value to customers does not always return enough revenues.

TOCICO was, and still is, financed by selling value, mainly the revenues from the annual conference, delivering the certification exams, and membership fees.

What is the value generated by TOCICO?  And for whom this value is significant?

The goal of TOCICO, to my mind, is to support the spread of TOC awareness, knowledge and successful implementation throughout the world.

This goal could be especially valuable to four different market segments. Each one of the segments should be divided into two sub-segments:  those who are already familiar with TOC, and those who are not.  Generally speaking TOCICO faces only those who are somewhat familiar with TOC, like having read The Goal.  We need to find marketing ways to raise enough curiosity in TOC and then the value from TOCICO would become clear.  Here are the four segments:

TOC knowledge gives consultants significant advantage, no matter whether they use the name ‘TOC’ in their practice or not.  The ability to quickly identify the constraint / core-problem, use the TOC available insights for the direction of solutions plus the systematic use of cause-and-effect, are required capabilities for doing better job.  This is the highest value consultants can get.  Add to it the spread of TOC, which adds more relevant leads and opportunities.

The value to corporations is especially interesting.  In most cases the initial TOC implementation is guided by consultants.  The managers that learn directly from the consultants might, mainly after the consulting company leave, get constant stream of value from TOCICO.  At this stage the corporation faces new needs.  One of them is to make sure all their employees know what they need to know to get the improved results.  New employees also need simple and effective training on the TOC basic knowledge to understand the new thinking behind the not-so-common procedures.  This might require guiding the employees to take the certification exams to prove their level of understanding.  In order to learn the materials TOCICO will launch several educational programs that cover the various certification areas.

Another need of corporations, which can be addressed by TOCICO, is answering the question what next to implement?  This means covering topics that have not been implemented by the organization at that time, like Throughput Economics and the use of Goldratt’s Six Questions for guiding the evaluation of new products/services.  The effective way to evaluate what additional TOC insights should be incorporated next is by participating in a TOCICO conference as well as viewing several videos and webinars offered by TOCICO.

The products/services of TOCICO need expanding into education/training programs to provide more value to all its market segments.  In particular there is a need for training programs. The Alex Rogo program, announced in the 2019 TOCICO conference in Chicago, provides effective guidance for self-learning. Training programs for higher level people could be adjusted to the specific requirements of corporations.  Eventually TOCICO should be able to offer basic TOC education to any individual, or organization, all over the world in variety of languages.

In order to achieve the generation of new ongoing stream of value TOCICO needs to stabilize its financial state.  This means TOCICO needs the support of its members, both individuals and corporations.

My call is to everyone who appreciates the potential value to be generated by TOCICO to become a member and by that support the ongoing TOCICO activities.

Increasing the membership is a necessary condition. When it’d becomes wide enough it’ll also become sufficient, as there are enough great people who are willing to contribute their time to do voluntary work to generate that value.  The neutrality of TOCICO is an asset that is absolutely necessary for both the value and the willingness to volunteer.

Keep in mind the global value of TOCICO when you evaluate the cost versus its specific value.  Eventually any charge for products/services generates revenues that are needed for carrying the full value of TOCICO to the world.

4 thoughts on “The Value Generated by TOCICO”