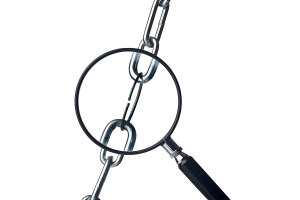 A recent discussion on what is the appropriate TOC definition for ‘constraint’ leads me to state some historical facts that highlight the development of Goldatt’s approach to constraints.

The term ‘constraint’ was defined “Anything that limits the system versus its goal”.  It was conceived to answer three significant limitations of the term ‘bottleneck’.

1. When all resources have enough capacity to process all the demand then there is no bottleneck. However the system is able to do more.  Thus, looking on the market demand as a ‘constraint’ is quite valuable.  It allowed managers to understand that there is no excuse not to ship everything on time.

2. Being a bottleneck does not ensure being a constraint. There might be another bottleneck with even more load.

3. We might have a true resource-capacity-constraint (CCR) that is not a bottleneck.  While on average there are idle times, in other times the queue behind the CCR is so long that some potential demand is lost.

It was realized from the start that the constraint limits the throughput (T) of the organization.  Goldratt even played with the idea of introducing the term of ‘inventory constraints’ referring to trouble-makers that force the organization to maintain more WIP.  He backed off this term to keep the simplicity.

The real power of the term ‘constraint’ came through the paradigm that an organization cannot have many constraints.  Dependencies coupled with statistical fluctuations do not allow interactive constraints in the chain. This realization led to the conclusion that the shop-floor can handle only one constraint without creating chaos.  In 1989 Goldratt wrote The Haystack Syndrome and presented a rather complicated algorithm to handle multiple constraints.  The whole development of the ideas was set around capacity constraints.  The chain analogy, where there has to be one, and only one, weakest link in the chain was widely used. Thus, the default for a constraint was lack of enough capacity of a resource.

The wide definition of the term constraint did cause problems.  People used to say that the constraint lies between the eyes of the CEO.  Flawed policies, especially policies concerning efficiency, were called ‘policy constraints’.  So, the idea was that the system is limited by a capacity constraint, and failing to exploit it is due to policy constraints.

The full set of TP (thinking processes) was developed in 1990. Effect-cause-effect trees and the cloud existed before (even before the 5fs) but not the other tools we know today.  The definition of the CRT raised the notion of the core problem – the conflict (cloud) that causes all the undesired-effects.  Resolving the conflict by challenging a basic assumption behind the conflict would push the organization to a new level of performance.

So, is the core-problem the real constraint?

It remained an open question for a while.  Core problems touched upon local versus holistic thinking, but also on behavioral patterns and opened the door for re-evaluating the value the organization brings to the market.  The core-problem could also challenge the paradigm why do we exploit a CCR rather than immediately elevate it.

Fact is: we did not ask ourselves these questions in the 80s.

Goldratt publicly regretted calling flawed policies “policy constraints” sometime in the 90s, explaining that policies should be eliminated and not exploited and subordinated to.

A major development in the TOC thinking came around 2003 with the idea of the Viable Vision.  Suddenly the way to improve an organization did not come through elevation of a capacity constraint and even not through challenging the conflict behind a policy-constraint.  With the term “decisive-competitive-edge” the TOC thinking has realized the need to challenge the value the organization offers to its customers.  The core idea was to answer a need of the customer in a way no other competitor can.

Explaining how come the VV did not care what is the constraint, Goldratt spoke about two different changes.  One is minus-minus – you identify something that is not right (minus) and you change it (minus of the minus) and a plus-plus change where you take a big step towards the “pot-of-gold”.  When such a step is taken one needs to carefully re-think all the conditions that would be sufficient to bring the organization to growth along the “red curve”.  Lack of capacity of a specific resource becomes a triviality that needs to be eliminated.  Many other potential constraints would be elevated long before they become constraints.

7 thoughts on “A concise history of constraints”