A real story from the Holy Land

four weeks ago the annual parade of the homosexual community took place in Jerusalem. The police dedicated a lot of manpower to make sure no violence would take place. But, in spite of all the security measures an ultra-orthodox male attacked as many people he could. A sixteen years old girl was murdered and five wounded. When that person was taken into custody – it was revealed that ten years ago he attacked the same parade and wounded several people, a crime for which he was sentenced to ten years in prison. He was released just two weeks prior to the incident. 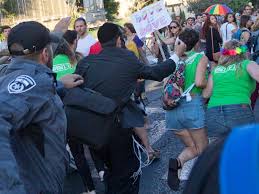 This murder should not have happened. There was prior knowledge, even expectations, that such a person might do it again.

The automatic reaction to the incident was carrying an inquiry to find those who were responsible for the terrible event. The existing common culture in Israeli politics is demanding the layoff of the responsible parties who have failed to do their job. The tragic consequences made the failing much more severe. This means, failing to do your job is bad enough, causing tragic consequences, even though you did not have any influence on the consequences, is TERRIBLE and you have to pay the price.

Let me stress the last point as it is part of the general ignorance to deal with uncertainty. If the attacker would have been stopped before wounding anyone – no inquiry and no public punishments would have occurred. So, the paradigm is that when you make a mistake you are responsible for the consequences of the mistake. This is true even though the actual consequences depend solely on luck (or God).

Part of the cultural problem is the participation of the media in the vocal public demand to remove senior figures from their job in order to feel that “justice has been done”. The smell of blood is of great value to the media.

Does the automatic reaction reduce the probability for future mistakes???

To my mind: definitely NOT. There are three causes for failing to prevent similar mistakes in the future:

I have developed, together with Dr. Avner Passal, who is an organizational behavior consultant, a methodology for Learning from ONE Event (called also learning from Experience). There is a past webinar on the TOCICO site and everyone who just likes to get the slides could write to elischragenheim@gmail.com).

However, the necessary condition for truly learning the RIGHT LESSONS from an unfortunate event is not to prosecute people for their mistakes, but demanding that mistakes should not be repeated!

There are three different cases where we should take actions against people who made major mistakes:

When the right culture is in place, recognizing that we all make mistakes and when we do such a mistake we are required to learn the right lessons for the future. Implementing the structured methodology would generate real value.

The ability to analyze an unfortunate event (it can also deal with unexpected fortunate events), diagnosing the core flawed paradigm and carefully develop the ramifications, should be viewed as an integral part of TOC Culture leading to ever-flourishing organizations.

4 thoughts on “What do you do when something that should not have happened – has happened?”