If TOC is a supreme management approach how come we have such difficulty to market it?

I believe this is the most common question of all the TOC enthusiasts. It is the one fact of life that points to a potential hole in the generic approach.  I have heard many explanations, including from Goldratt himself, as well as from people outside of the TOC circle. The key undesired effects (UDEs) of the current state of TOC are:

I have heard from many people the first five UDEs. The sixth one is my own observation and it differs from what Goldratt believed just before his death.  Goldratt view was that TOC has reached the level of robust knowledge that can be put in a template and be repeated. I don’t think this is the current state, but I believe it is possible to achieve it. 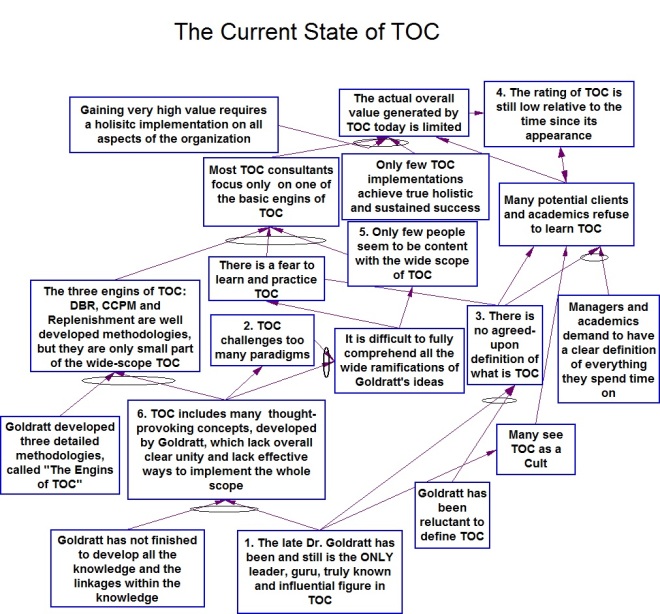 I have outlined the CRT of the current state of TOC based on my views and rationale. Of course you all are invited to challenge every link in the tree.  There are TWO resulting big damages:

Many potential clients and academics refuse to learn TOC

The actual overall value generated by TOC today is limited

The latter one is the ultimate measure of the current state. The problem is that it is in contrast with the belief of thousands of Goldratt people, students and followers that:

We currently lack a single person that has the charisma, intellect and character to take over the leadership of the TOC community to eventually achieve the goal of having TOC as the recognized way to manage, and by that generate huge value.

Do we really need ONE leader to carry TOC ahead?

The resulting personal core conflict is between every person operating individually according to his/her power and depth of knowledge, or collaborating in a synchronized way with many others to overcome the UDEs and especially unifying the knowledge to be effective for marketing, sales and implementation that would deliver huge value.

TOCICO supplies some of the necessary conditions to lead the TOC community to new achievements. It allows new people access to knowledge in various ways and it provides the infrastructure to meet other people from all over the world in an annual conference, which gives the chance for TOC experts to demonstrate their own abilities.  But, TOCICO does not initiate business, does not educate and does not support any implementation.  TOCICO has initiated the white-paper process to progress the body of knowledge, but so far it has not yield much response and new knowledge.

Here are some options for the basic Strategy for a TOC consultant:

Let me just state that the big consulting companies are not attached to a specific methodology, but they gain a competitive edge, some of them a truly decisive competitive edge, by being big with wide experience.

TOC has very strong international spread, and the accumulative experience is pretty wide if we succeed to bring it together.

Any other idea that might lead you, a TOC consultant, to achieve a decisive competitive edge?

A practitioner within an organization who strives to make a real change that would yield a leap in performance has to be careful in dealing with several threats:

I claim that involving an external TOC consultant in internal implementations offers higher chance of success even when the internal TOC champion is very knowledgeable. The seemingly objectivity of an outsider causes less internal tension.  The other reason is that an outsider has a bigger chance of coming with a truly new paradigm that is not common within the specific business sector.  New paradigms have the potential of generating huge value, because the competition is slow to digest the paradigm.

Let’s have a public open discussion about the problem that is common to all of us. Please respond by commenting what direction of solution you see.

33 thoughts on “Marketing the Value of TOC”